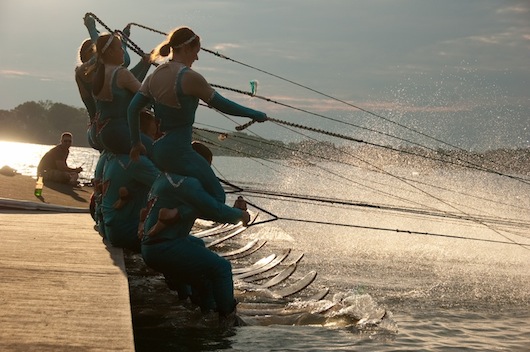 Our Final Pyramid leaving the pier. It is the most photographed act in water-skiing.

The Brown’s Lake Aquaducks is a Waterski Team based out of Burlington, WI sponsored by Envirude BRP Motors. The team consist of members ranging from 4 years old to 70 years old. From Memorial Day through Labor Day there are FREE shows performed on almost every Thursday Night. The not-for-profit ski team strives for excellence every year and competes in state and national water ski tournaments, bringing home both national champion and state champion titles.

The Aquaducks first started skiing on Brown’s Lake in 1976 and have been there ever since. Throughout the years of the Aquaducks there have been many accomplishments that the club has made. The Aquaducks have performed at the Bartlett’s All Star Show and have been pictured in Water Ski Magazines, as well as on ESPN National TV. Many of the clubs native members have continued their skiing passions on Collegiate Water Ski Teams, Cypress Gardens in Florida, Sea World, and Marine World, while others have performed stunts in movies and on television. Native members have skied all over the world ranging from California to West Germany, a passion that all began from Brown’s Lake.

The Brown’s Lake Aquaducks is open to join for anyone. Many members that have been on the club for over ten years now did not know how to water-ski when they first joined. The Aquaducks work together to teach new members how to ski and innovate the water-skiing industry safely. A major priority of the Aquaducks is not only contributing to the water-skiing world, but also to local communities as well. The Aquaducks have hosted benefit shows, CAP (Child Abuse Prevention) Fundraising shows, and they continue to maintain as strong donors to local community projects.

As the club continues to grow and revolutionize, one thing will never change: Every member’s passion for the love of waterskiing. Please come out and visit to witness what excellent talents these individuals have. They work hard every week and they would love to show you on what you thought wasn’t possible.