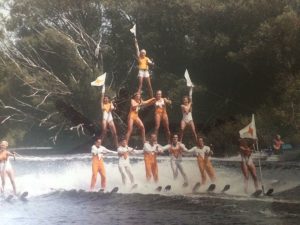 The Aquaducks first started skiing on Brown’s Lake in 1976 and have been there ever since.Throughout the years, there have been many accomplishments that the club has made. The club has performed at Bartlett’s All Star Show, has been pictured in Water Ski Magazines, as well as ESPN National TV.  The team has claimed multiple State and National Championships, both as a team and for individual aspects of the show.

Many of the club’s native members have continued their skiing passions on Collegiate Water Ski Teams: Cypress Gardens in Florida, Sea World, and Marine World, while others have performed stunts in movies and on television. Some members have skied all over the world ranging from California to West Germany, a passion that all began from Brown’s Lake.

The Brown’s Lake Water Ski Club is open to join for anyone. Many members, who have been on the club for over ten years now, did not know how to water ski when they first joined. The Aquaducks work together to teach new members how to ski, and continue to innovate the water-skiing industry safely.

As the club continues to grow and revolutionize, one thing will never change – every member’s passion for the love of water skiing. As you watch one of our shows, you will witness what excellent talents these individuals have. They work hard every week and love to show you what you thought was impossible. 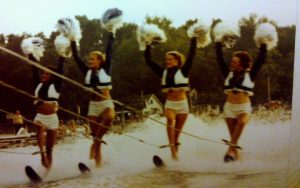